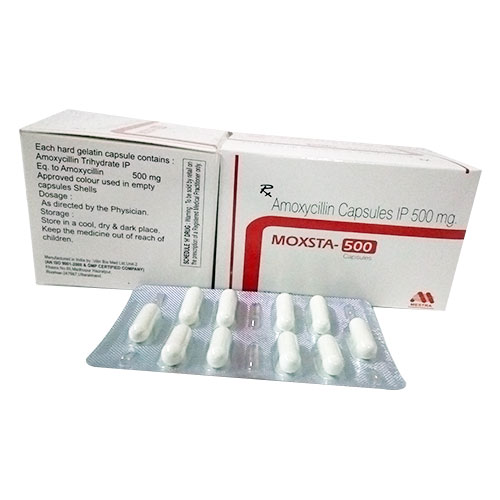 Amoxycillin Trihydrate Capsules are used in the treatment of certain infections caused by bacteria such as pneumonia; bronchitis (infection of the airway tubes leading to the lungs), and other infections of the ears urinary tract, throat, skin, etc. In addition, it is used in the combination with other medications to eliminate H. pylori, a bacteria that causes ulcers.

Amoxicillin is a powerful drug that belongs to a class of medications called penicillin-like antibiotics that functions by inhibiting the growth of bacteria. Further, Amoxycillin Trihydrate Capsules can also be prescribed for other diseases too.

Therefore, these are the most common side effects that the patient feels while taking Amoxicillin Trihydrate Capsules. All the above-listed adverse effects don’t need any special medical attention but if the body develops any serious side effects then getting medical help is worth it.

As Amoxicillin Trihydrate 500 mg Capsule is an effective medication, therefore, it should be taken exactly as per the doctor’s advice. Along with it, any individual can maximize the benefits of this medication by keeping the below-listed points in mind. The speed of recovery will also be increased by considering these special precautions.